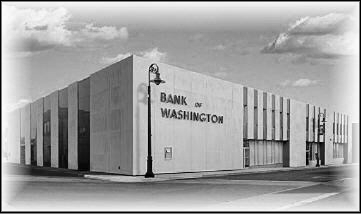 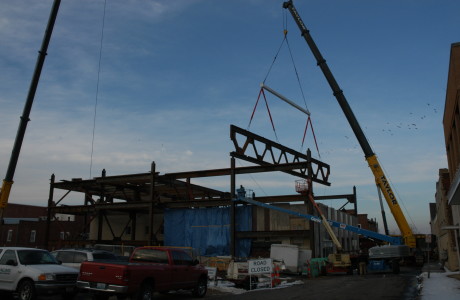 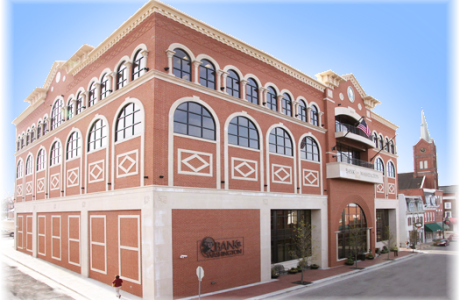 Project Description:  The Bank of Washington, located in historic Washington, Missouri, was adamant about expanding their main branch from its meager two story quarter block presence into a large corporate headquarters. However, they set a few ground rules which prohibited any major interference with on-going bank operations and its loyal customers.

The new design was to construct a five story building which would encapsulate the original bank structure. KPFF Engineering accomplished this feat with five heavy structural trusses which spanned over the existing structure. Designing the project on paper was only a small portion of the planning for this project. The design had to be executed.

Acme Erectors was contracted in conjunction with Steward Steel to attack the difficult task ahead. Months of planning enabled Acme Erectors to receive the 100 ft. long 12 ft. tall trusses, weighing around 70,000 lbs each, in staging areas set up in the streets surrounding the bank. The trusses were delivered in pieces and assembled in these staging areas. The delievery and installation of the trusses resulted in the bank only being closed for 4 hours on a Saturday; however, customers did not mind and neither did the owners. They all lined the streets to witness Acme Erectors install all five trusses in just over 10 hours on one Saturday.

The balance of the building was constructed with intense coordination with the general contractor and the City of Washington to top off another successfull project.